A few weeks ago I went to the Leeds Waterfront festival, a free yearly event over several locations along the canal and river. 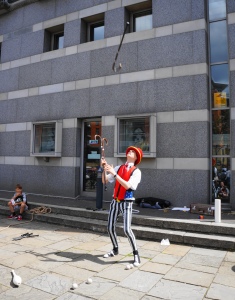 It’s a good festival, and the many locations seem to spread people out enough to not feel too crowded.

I started near the Leeds Armouries, at the Leeds Dock.

This was one of three main sites, the one I didn’t get to was at Granary Wharf and had a boat-building event on.

Anyway, at the Leeds Dock event there was a craft market, a bit small, but some good stuff there. They also had dragon boat racing, street entertainers, and free transport to the other venues.

From there I walked to Brewery Wharf which had lots of food stalls (far too many to choose). I felt there were far too many food stalls, I mean, once you’ve bought your food from one, that’s pretty much it for spending money. 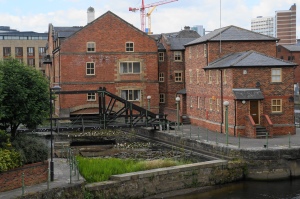 Then onto the Leeds Minster…

I want to have a wee rant about the Minster here, so bare with me a moment.

I’ve been to the Minster three times in my lifetime.

the first was when I was a kid and my mum was preaching there. Inside the minster is very different to any church I’ve been to before where people sit in rows. At the minster, well I can’t really explain it, but it seemed as a child you sat facing other people and couldn’t see who was speaking. Very strange. 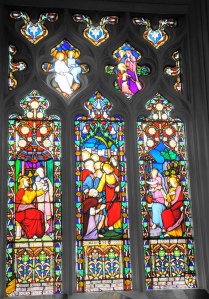 The second visit was a few years ago when I was with a group walking around Leeds, we decided to pop into the church because it had a cafe. As we were leaving the cafe we were in the entrance of the church and I was telling someone about my first visit, how funny I found it. An older lady who was arranging flowers started shouting at me, really shouting, because I was being disrespectful about her church.

The third visit was for during the waterfront festival. The leaflet for the festival said the Minster had the cafe open and rather than stand eating from a food van I figured I’d go to the cafe and sit down.

I got there only to find the cafe wasn’t open. Well, I decided to walk aroound the church and take some photos. I have one of those large fancy looking cameras and it was hung around my neck like a tourist. I was obviously up for taking photos.

I walked into the church and passed a woman who greeted me and let me go into the church. I checked for signs saying whether we could take photos and saw none. So I began, taking a few snaps.

After a few photos had been taken the same woman who had welcomed me came up to me and informed me I was welcome to take photos… then said, we expect you to donate in the box though. Now that’s sneaky.

So, Leeds Minster, not a place I recommend.

I stopped taking photos and left, heading back to the Leeds Bank and hoping to get the free taxi boat to the Granary Wharf. no such luck, the queue was long and the boat couldn’t carry more than a handful of passengers.

An alternative was the free coach to the third location, Thwaite Mill. This is a great mill, but unless you have a car it’s very difficult to visit, so the free coach ride was wonderful.

One other problem I found with the festival (the first being events advertised that didn’t happen) was lack of mobility access. You may disagree, but few buses link the events. the river taxi didn’t seem accessible and the coach certainly wasn’t. Places like Thwaite Mill are at the end of an incredible long, narrow road, with no public transport. It was good that free transport was available, but none of it was suitable for people who found walking difficult.

Thwaite Mill is an incredible place, not valued enough by Leeds. It holds regular events that seem to be almost unheard of like the regular steampunk market that was happening on the same day as the festival.

Amongst all the steampunk stalls was a charity stall which had lots of painting equipment. I was pretty much brassic (skint) and figured the huge watercolour pad and boxes of expensive paints were well out of my funds so walked by… twice. the third time I asked out of curiosity how much the pad cost. £1, wow, that’s a bargain. How much for the used paints? £1… How much for the brand new watercolour set (which I know is £40 in the shop) £1. In the end I spent a fiver and reckon I came away with £80 worth of stuff.

I took one video on the day, which is below. It was supposed to be a demonstration of how to dress a horse for pulling canal boats, but after all the walking my back was in agony (you can hear my heavy-painful breathing in the video) and ten minutes in she still hadn’t got to the horse, so I stopped filming. But what she does say is interesting.